"...to the north of India, across the ragged rampart of the Great Himalaya, there is a sacred mountain called Kailas. For more than two millennia the faithful have made the arduous journey here..." (1) 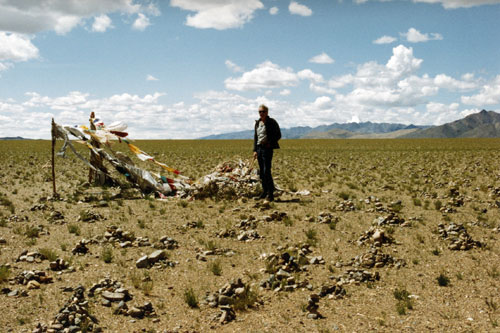 
"South of Mount Kailas, across the great plain of Barga at the base of the majestic Mount Gurla Mandhata" (7728m) "are the two lakes Manasarova...and Rakshas Tal...They are the highest bodies of fresh water in the world, with Manasarova...at 4,558m...the larger of the two lakes (330 sq km...) and considered by both Buddhists and Hindus to be worthy of veneration." (4)

"Manasorova ...is...liberally endowed with both religious and mythological associations. Its beauties have been lavishly praised, in particular the rich colouring of its waters, which grade from the limpid blue near the shores to a deep emerald green as they approach the centre." (1) 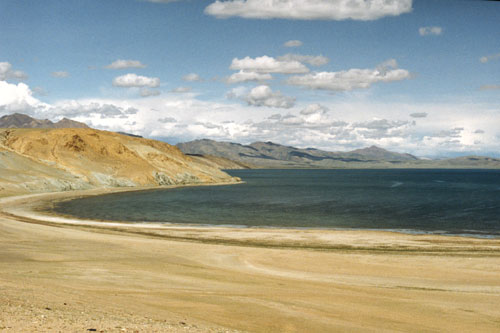 "...the meeting of Kailas and Manasorova is beyond coincidence...Manasorova is Kailas' inseparable complement in every respect. The lake is female to the mountain's male, receptivity to its activity, depth to its height, a mirror to a proud statement; and Manasorova's depths and colours contain a mystery equally sublime. Kailas is an immutable temple, a focus of adoration; Manasorova is a shifting fluid mirror meant for contemplation." (2) 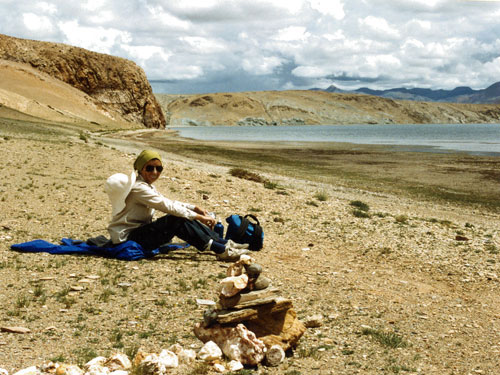 "Kailas rises in...Western Tibet, one of the highest, loneliest and most desolate places on the planet...Ordinary standards would judge it bleak, barren wasteland, but, like much of Tibet, the region seems to rise above common judgement. What is barren elsewhere becomes luminous here." (2) 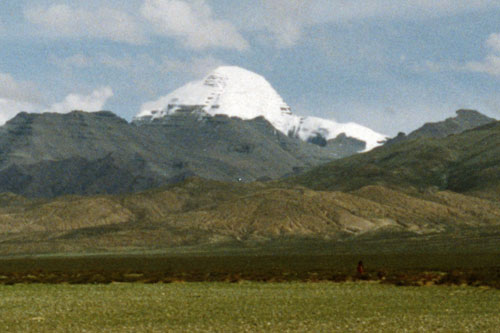 
"Personality consists in the power to influence others...due to consistency, harmony and one-pointedness of character...If these qualities are present in a mountain we recognise it as a vessel of cosmic power, and we call it a sacred mountain...There is no mountain comparable to Kailas...To Hindus and Buddhists alike Kailas is the centre of the universe..." (3) 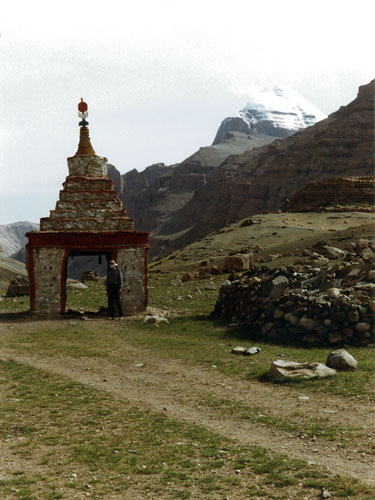 Derek at the gateway chörten to Kailas kora 1992


"Mount Kailas is remarkable in that four of the largest rivers in Asia have their sources within 100km. of it: the Indus flowing to the north, the Brahmaputra to the east, the Karnali, one of the main tributaries of the Ganges, to the south, and the Sutlej to the west...The power of this strange, domed peak has gripped the imagination of the people of India and Tibet since time immemorial...it has always been the most sacred of mountains for Hindus, Buddhists, Jains and 'Bonpos'...many Hindu and Buddhist ascetics, hermits and pilgrims have been drawn to the area...to see it, circumambulate it, and to practise austerities and meditation." (4) 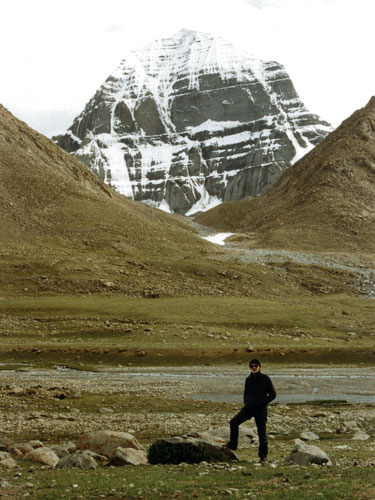 Derek at the north face of Kailas 1992
"Few mountains in the world can rival the grandeur of Mount Kailas (22,028ft...), the famed holy peak of Western Tibet...Tibetan Buddhists...recognise Kailas as the manifestation of Mount Meru, the 'navel of the world,' rising 'like the handle of a mill-stone' into the heavens...Kailas is also regarded as the residence of Demchog...and his consort, Dorje Phagmo. The mountain also has a special association with Milarepa, who spent several years here meditating in a cave...The pilgrimage to Kailas has always been considered the most difficult in Asia, if not the world. The distances are tremendous the weather particularly harsh, supplies almost nonexistent...Nevertheless pilgrims came from the far corners of Asia defying these hardships to walk the 32 mile...circuit around Kailas." (5) 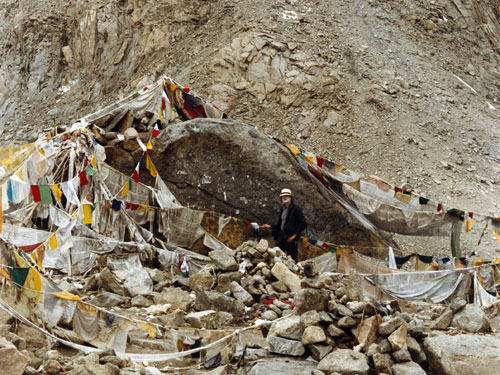 Derek and Sheila made the pilgrimage to visit Manasorova and circumambulate Kailas in August 1992, setting out from the Nepal/Tibet border with a crew of four Tibetans, a Landcruiser and a 3 ton truck carrying the camping gear and provisions. Within days, they were reminded of the words of Brian Beresford: "It's a very rigorous undertaking...It's a very, very difficult journey to make" (1), when Derek started suffering from amoebic dysentery, with all its unpleasant consequences. After five days hard travelling, camping in some of the remotest places on Earth, they arrived at Manasorova, collecting some of its sacred water, and savouring the unique space and silence of the region.  Two days later they set off, accompanied by two baggage yaks, and completed the three day circumambulation of Kailas. 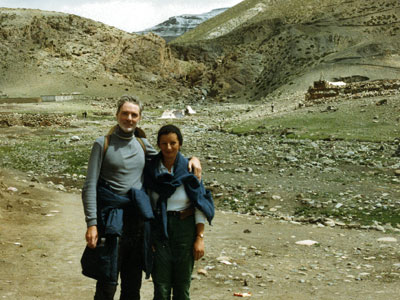 Derek and Sheila at the end of the kora 1992

It took several weeks, and medication back in England, to shake off the disease. The journey remains clear in their minds in every detail.